What value do you place on disease surveillance?

Chair of the BVA's Surveillance Working Group -  Kate Sharpe - discusses what we already know about the profession’s relationship with surveillance and why we need to unpack this further. 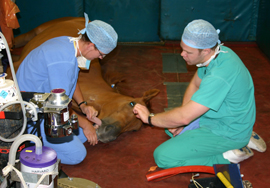 With the recent launch of BVA Surveillance Working Group (SWG)’s survey ‘Surveillance use, understanding and engagement across the veterinary profession’, Chair of the SWG, Kate Sharpe, discusses what we already know about the profession’s relationship with surveillance and why we need to unpack this further.

Disease surveillance has been a long-standing policy priority for BVA and its members. With this in mind,  BVA created its Surveillance Working Group to explore the current state of play with surveillance networks in the UK and formulate BVA’s position on surveillance across large animal, small animal, equine and wildlife practice.

The landscape has changed in England and Wales

Following several reviews, 2014 saw the Government begin to introduce a new structure for disease surveillance in England and Wales. This resulted in the closure of eight of the 14 veterinary investigation centres. The network includes APHA's specialist avian centre at Lasswade in Scotland, a laboratory testing facility at Newcastle and a central research and diagnostic facility at Weybridge in Surrey.

APHA centres are now supported by post mortem and diagnostic services provided by partner facilities, including an extended free carcase collection service, as well as advice and support to veterinary surgeons in practice to diagnose, control and prevent disease in farm animals. Read more about the services available in your area.

Surveillance reporting is also expanding beyond its traditional roots in herd medicine towards companion animal practice, where the development and growth of national practice management research and surveillance systems such as SAVSNET and VetCompass offer the opportunity to participate in scanning and syndromic surveillance in individual veterinary medicine.

In both large and small animal disease surveillance a renewed emphasis has been placed on modernisation, optimising engagement and increasing value from current surveillance networks through the use of technology. Examples of this include SAVSNET’s real time data feedbackand APHA’s recently launched Sheep Disease Surveillance Data Dashboard.

What we want to know

Drivers for, and barriers to, engagement

We want to understand the differing attitudes held in relation to the value of surveillance reporting across the profession and what drives veterinary professionals to engage with the current system. Of course, with this line of questioning comes a need to understand the barriers to engagement with current networks.

Increasing our understanding of these drivers and barriers to engagement will enable BVA to clearly set out its position on current surveillance systems and highlight key questions to pose to the Government to improve surveillance networks and outputs.

How can we find this out?

The BVA Surveillance Working Group has developed its ‘Surveillance use, understanding and engagement across the veterinary profession’  for England and Wales to initiate this line of questioning.

The survey asks you to tell us how you engage with the current system and what you value about its reports (or don’t, as the case may be), aspects that could be improved and what would encourage you, and your colleagues, to engage more with the differing disease surveillance systems and services.

Who do we want to hear from?

The full breadth of the profession. The survey is designed to be pan-professional, gauging input from those working in practice, non-vets, as well as views from veterinary professionals in academia, industry, Government or now retired. As a thank you for completing the survey, you will have the opportunity to enter a prize draw to win a £100 Amazon gift voucher. Depending on your area of work, the survey will take no longer than 20 minutes.

Take the ‘Surveillance use, understanding and engagement across the veterinary profession’ survey.