BVA President Daniella Dos Santos tonight called on the government to work with the veterinary profession to ensure that workforce capacity meets demand and animal health and welfare standards remain high in the post-Brexit UK. 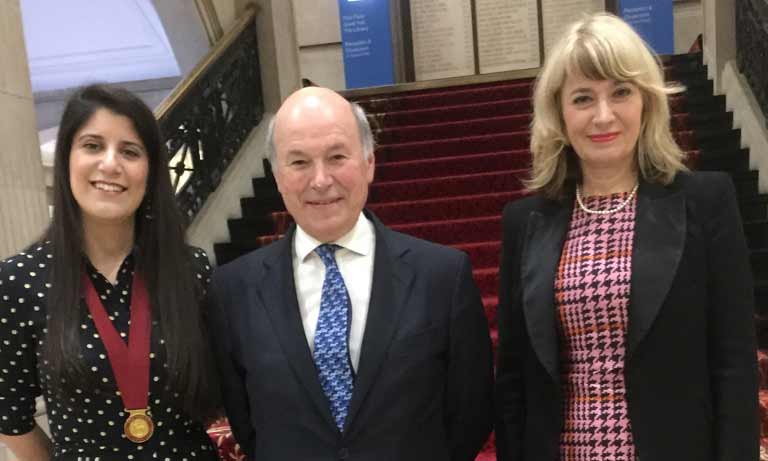 Her call in her speech at BVA’s Annual London Dinner came after Boris Johnson confirmed a set of negotiating priorities on Monday that would mean animals and animal products exported from the UK into the EU single market will need veterinary certification and checks whether or not the UK leaves with a deal at the end of the transition period. Concerns have also been raised about how the future immigration system will protect vets working in abattoirs – 95 per cent of whom hail from outside the UK – as some may start in lower-paid meat hygiene inspection roles when they first enter the workplace.

Addressing over 80 guests at the dinner in Westminster, including Minister for Rural Affairs and Biosecurity Lord Gardiner of Kimble, England’s Chief Veterinary Officer Christine Middlemiss, key representatives from animal health and welfare organisations and colleagues from across the veterinary profession, BVA’s President said:

“Only yesterday, the Prime Minister confirmed a set of negotiating priorities that would mean animals and animal products exported from the UK into the EU single market (and indeed from Great Britain into Northern Ireland) will need veterinary certification documents and checks whether we end up with a deal or a No Deal.  This could spark a surge in demand on our members’ capacity, and really underlines the need for a multi-pronged and multi-stakeholder approach to ensure we have a flexible and future-proofed veterinary workforce for the years to come.”

Ms Dos Santos welcomed efforts to increase vet school places and widen access to help boost levels of vets studying in the UK, but cautioned that these needed to be matched with increased per capita funding. She said:

“It’s estimated that the cost of equipping students with the skills they need to qualify is £20,000 per student, per year of study.  The reality is that tuition fees and government funding don’t come close to matching these costs. And this gap will widen still further if funding levels stay static but need to be spread across higher numbers of students.

“If the Government is truly committed to boosting workforce resilience and ensuring that we have the capacity we need in crucial areas after Brexit, I would urge Ministers to look at how to fund our future vets, to give students from all backgrounds the best shot at a successful pathway to graduation.”

Later in the speech, Ms Dos Santos asked for a firm commitment from the government to not allow food produced to lower animal health and welfare standards to be imported as part of any future trade deal. Addressing representatives from the farming community including NFU’s Vice President, she said:

“I can state very clearly that we as vets stand with you in pushing for assurances that imports produced to lower animal health and welfare standards will not be accepted as part of future trade deals.

“The media is obsessed with chlorine-washed chicken and it certainly makes a good headline. But we mustn’t allow it to distract from the grim realities about the animal welfare compromises that could be imported to the UK. I hope that tonight we can all agree that our reputation relies on not allowing animal health and welfare to be compromised at any cost.”

Ms Dos Santos also updated the audience on BVA’s campaign for legislation to be strengthened against illegal imports of puppies for sale. She said:

“As a nation of animal lovers, it is simply unacceptable that criminals are still getting away with this cruel and exploitative trade.

“All too often vets are faced with animals of unknown origin that may have been smuggled. To help manage this problem, BVA has developed flowcharts that advise our members of the simple steps to spot and report suspected illegal imports. But we shouldn’t be put in this position. We need a more robust approach from government to help stamp out this scourge from our society.”

The BVA President ended her speech by thanking BVA staff, members and all stakeholders for all their support for the profession, and paid special tribute to Government vets for “working so hard behind the scenes to keep us and our animals safe, all against a Brexit backdrop”. She said:

“It’s going to be another busy and challenging year, but I’m excited by what lies ahead and will make sure that BVA continues to speak with a strong voice on all the issues that matter most to our members.”

Lord Gardiner responded to the speech as BVA’s Guest of Honour.