Neil Paton, Technical Director of Gwaredu BVD and SVP of Welsh Branch talks about the successes of the programme and hopes for the future. 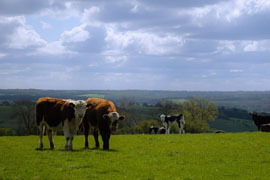 Bovine Viral Diarrhoea (BVD) is a highly contagious viral disease of cattle and is one of the biggest disease issues facing the UK cattle industry. The BVD virus produces immunosuppression and reproductive failure, making it difficult for cattle to become pregnant and making cases of pneumonia, diarrhoea and other diseases much worse.

BVD results in significant welfare, and therefore financial, problems on the farm (approx. £45 per cow per year in beef herds and £15000 per year in average dairy herds). BVD is prevalent in Wales and was estimated to affect 30% of farms. However, with appropriate testing and management, it can be completely eradicated from a farm.

BVD is maintained and mostly spread by the presence of persistently infected (PI) cattle in herds. These are infected in the womb and, as they never get rid of the virus, they continue to spread it amongst the herd for the rest of their lives. The carrier can live for many years and potentially infect the entire herd. The best way to deal with BVD is to remove these animals as soon as they are found.

What is being done in Wales?

Gwaredu BVD is the BVD eradication initiative in Wales, which intends to remove this disease from the national herd for the benefit of all cattle farmers in Wales. It was launched at the Royal Welsh Agricultural Show in 2017 and on-farm testing started on 1 September 2017.

By testing young stock, the programme identifies herds that have BVD present on farm and supports these farmers to remove the infected animals. The young stock bleed is carried out at no cost to the farmer and subsequent testing to identify PI animals is supported up to £500. Farmers involved in the scheme are expected to support the scheme through paying for any testing above the £500 limit during the PI hunt, removing the PI and any costs associated with protecting the farm from reinfection.

How successful is Gwaredu BVD?

In just one year, vets in Wales have tested over 5900 farms, which is over 50% of all farms with cattle. From a standing start this is very impressive.

How is testing carried out?

Testing is carried out on the farm at the annual TB test, with five animals between 9 and 18 months being blood sampled and tested for BVD antibodies.

Results are usually available by the second day of the test, just 72 hours later. This allows the farmer to make a quick decision on what to do next. If necessary, a farmer can potentially have all animals tested and the samples sent to the lab within the same week as the being told they have a potential BVD issue, helping them to start dealing with the disease quickly.

What happens after testing?

The majority of farms (72.7%) so far have tested negative for the disease, so the most likely action required of a farmer joining the scheme is only to take sensible biosecurity measures.

For the remaining 27.45% of farms which show evidence that the disease may be present, the farmer can choose to:

How are PI hunts carried out?

If BVD is discovered on farm, PI animals can be identified rapidly by blood sampling all cattle present on the farm this would be followed up by tagging of new born animals in the following calving season.

In an ideal situation this blood sampling could be done at the TB test reading day. This means the farmer can go from identifying a problem to dealing with it very efficiently although it is recognised that logistical issues might not allow this to occur.

The scheme allows for a farmer to have a problem identified and solved, with support given, in a rapid efficient manner, alongside guaranteed financial support with minimal paperwork. All this can be done before the Gwaredu BVD office is notified, as long as certain criteria (a positive antibody response on a young stock screen) are met.

Tagging all calves and using them to identify PI dams is an attractive way to conduct a PI hunt, but it risks not identifying a PI animal until late in the process, with the associated costs of having an undetected PI on farm. The gold standard definition of a PI animal hunt is testing for the presence of virus 21 days apart, with all virus positive animals having a confirmatory test conducted.

Whilst waiting for the confirmatory test, animals testing positive or inconclusive should be kept in isolation, particularly away from pregnant animals, until a negative test result is received. Prolonged quarantine (e.g. to raise to slaughter weight) would not be recommended due to the infectious nature of the disease, so the likelihood of it spreading from all but a category 3 equivalent facility would appear to be high. The presence of disease on farm will probably cost more than will be gained by weight at slaughter.

However, many farmers cull calves based on single test as the predictive value of BVD antigen tests are high. Vets may need to review this as the programme progresses and the number of PI animals in the national herd reduces.

What happens to PI animals?

The programme has no compulsory element to it, so it is the farmer’s decision about the fate of PI animals in their herd.

The Gwaredu BVD programme recommends that PI animals are slaughtered as soon as possible after diagnosis. BVD infection can lead to mucosal disease (MD), which is invariably fatal. This can happen at any time and generally about half of PI animals will become MD animals if retained on farm. If this happens, the animal, and any investment in terms of feed and labour, will be lost to the farmer.

Overall the best option for the farm is to slaughter these animals at the point of diagnosis as the management and effects of these animals while on farm are problematic.

What next for Gwaredu BVD?

For farms that have not yet been tested under Gwaredu BVD, there remains the opportunity to get two tests under the scheme, as well as a PI hunt if required. Farms which have already been tested are eligible for two more tests during the project, so will be able to build up an in-depth picture of disease on their farms.

Gwaredu BVD is committed the improvement of the health and welfare of cattle in Wales through the eradication of BVD in the national herd and hopes that the efforts made by vets and farmers in Wales will be supported by legislation to protect the gains made by the industry.