Winners of the BVA Veterinary Photographer of the Year 2018 announced

This year we received over 500 entries showcasing the life of our members, including their professional successes, and bond with patients. Here we announce the winners of the BVA Veterinary Photographer of the Year competition.

Project managing the BVA photography competition is always the highlight of my working year. Building on the success of previous years, we had over 500 entries in the new categories for 2018; All creatures great and small, and The human:animal bond. These images showcased the life of our members and their bond with their patients.

This year, we were lucky enough to have David Tipling join the judging panel as our photographic expert. David has won many awards over his career, including European Nature Photographer of the Year, and is the commissioned photographer for more than 30 books including The RSPB Guide to Digital Wildlife Photography.

The standard of entries was incredibly high, with our judges taking over 4 hours to decide on the winning and commended images. Winning images were chosen based on their technical excellence, originality, and how much they fulfilled the brief.

We also opened the competition back up to our membership for the first time, allowing our members to select their favourite image taken from a shortlist as selected by the judging panel. 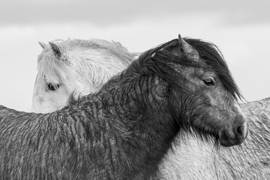 Steve Ashman won the all creatures great and small category with his photograph ‘Pair of wild ponies on Long Mynd, Shropshire.’

Steve qualified from the University of Edinburgh and worked for a period in private small animal practice before moving to the charity sector where he currently works as a veterinary surgeon with the PDSA in their Wolverhampton hospital.

Steve said: "I had a great day out photographing these ponies. I've loved this image since I saw it on the back of my camera that day and I'm delighted that the judges have selected it as a category winner. Thanks very much, I'm chuffed!"

"The winning shot of two ponies is beautifully composed, has a symmetry and uses the dark and light tones of the ponies to complement each other, resulting in a striking image that we were all drawn too."

The best part of the job by Peter Myatt 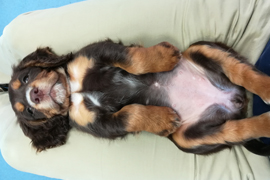 Peter Myatt won the human:animal bond category with his photograph ‘The best part of the job’.

Peter said: "It was a huge surprise to be told I had won one of the prizes. The photo was taken whilst on placement as a student, and I have recently started a job as a small animal vet. I hope all my patients will be this laid back".

"I was drawn to this image partly by its abstract nature. On the first view, it is not obvious the dog is on someone’s lap. It’s a strong engaging image and because of that slightly abstract feel means it stays long in the memory."

Steve and Peter each received £250 worth of gift vouchers from John Lewis & Partners.

The first ever Members’ Choice Award has been won by Liz Bailey with her image 'Shepherd’s Delight', showing a relaxed walk on the beach at sunset to wind down after a busy day with a red sky at night. The photo was taken on Aldinga Beach, South Australia in summer a few months ago.

Liz said: “This photo is a combination of what makes me happy; a warm summer's evening on the beach with my dogs. It was the red sky and the two of them being working breeds that gave me the idea for the title. It's amazing what you can achieve with an iPhone, a sunset and a couple of willing volunteers.”

Alongside the 2 winning photographs, 6 photos in the all creatures great and small category and 6 in the human:animal bond category received Commended awards – ranging from a pine marten emergency surgery to deer in Richmond Park – all showcasing the many unique facets of what veterinary work can entail.

All creatures great and small

British Veterinary Association President John Fishwick said: "Yet again we have received an almost overwhelming number of outstanding photos as entries for our competition. The quality and range of images have been quite amazing and our judging panel had their work cut out in selecting the winners and the highly commended entries in each category. It is a true reminder of the huge range of activities and interests of our colleagues."

The winning and commended images will premiere in an exhibition at BVA Members' Day at the National STEM Learning Centre in York on Thursday 20 September.

The full gallery of BVA Veterinary Photographer of the Year Competition 2018 entries can be viewed on BVA's Flickr account.

Veterinary Photographer of the Year - top tips for wildlife photography