David Walker, Head of Medicine at Anderson Moores Veterinary Specialists, gives an update on Cutaneous and renal glomerular vasculopathy (CRGV), sometimes called Alabama Rot, the disease characterised by sores or lesions usually on the bottom part of a dog’s legs.

Cutaneous and renal glomerular vasculopathy (CRGV) is a disease that is characterised by sores or lesions, usually on the bottom part of a dog’s legs.

It is often associated with sudden onset kidney failure, but the cause of the disease remains unknown. It is sometimes called Alabama rot, after a disease first recognised in Greyhounds in Alabama, USA in the 1980s; CRGV bears a number of similarities to Alabama rot. CRGV has received a lot of media attention in recent years, so you may have heard or read about it.

What is the veterinary community doing to learn more about CRGV?

Research into this disease has been ongoing since 2013 and has led to a number of scientific publications in the veterinary literature.

Research into CRGV is being led by Anderson Moores Veterinary Specialists, and its team continue to actively collaborate with other centres and specialists. Identification of cases is paramount to furthering understanding of this disease and Anderson Moores Veterinary Specialists is encouraging veterinary surgeons who see a suspected case to contact the specialist centre. Owners of confirmed cases (along with a sample of owners from the same veterinary practice) are being asked to complete a detailed questionnaire to help with the research. The location of confirmed cases can be checked on the Vets4Pets website.

How many dogs has CRGV affected?

Since November 2012, more than 180 dogs from 38 counties across the UK have been diagnosed with CRGV. Currently the disease can only be definitively diagnosed after death by looking at kidney tissue under the microscope, although your vet can have a high index of suspicion for the disease on the basis of the skin lesions and some blood test changes. 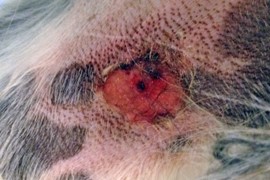 In affected dogs, skin sores typically appear an average of three days before the development of kidney failure; although in some dogs, kidney failure can occur up to ten days later. The signs of kidney failure can include tiredness, not eating, vomiting and a change in drinking. Although the sores are most often on the legs, they can sometimes be seen on the body or face. Some dogs only get skin sores/lesions without ever getting blood test changes.

A range of breeds have been identified with CRGV in the UK. There does not appear to be a particular age or sex of dog that is more likely to develop the disease.

There appears to be a seasonal distribution, with over 90% of cases being identified between November and May. On this basis, it is possible there is an environmental trigger; however, this is unlikely to be the full story and it is possible that certain dogs are predisposed to developing the disease. If you would like to see if any cases have been confirmed near where you live, this information is available online.

Research into CRGV is ongoing and updates on case numbers and research will be provided on Anderson Moores Veterinary Specialists’ website or Facebook page.

A national charity, the Alabama Rot research fund, has been set up to try and raise funds for research into this condition.