APHA have announced that the Avian Influenza Prevention Zone (APIZ) has been lifted across most of England.  However, the APIZ does remain in place in some districts - see the situation and current guidance for the UK. 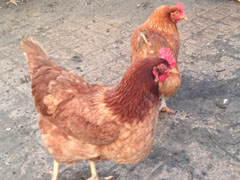 APHA have announced that the Avian Influenza Prevention Zone (APIZ) has been lifted across most of England. However, the APIZ does remain in place in the following districts of Lancaster, Cumbria, and Merseyside:

Full details are given on the Defra website. which should be read by anyone who works with or keeps birds. This sets out the current situation and the important legal obligation of birds owners. Defra have also issued a advice sheet for poultry owners to keep their birds safe from Avian Influenza.

The new APIZ will remain in place until 14 June 2017. The changes can be summarized as follows:

Birds outside the APIZ (which includes most of England)

In these areas, there is no longer an obligation to keep birds housed or netted. However, all poultry owners must continue to take steps to keep poultry away from wild birds, especially wild ducks, geese and gulls.

Birds inside the APIZ (targeted areas of Lancashire, Cumbria and Merseyside)

For those birds kept inside the APIZ, owners have a legal obligation to observe the requirements for disease prevention measures as set out on the Defra website. These include:

Restriction on gatherings of birds have been relaxed except in the area of the APIZ and for birds form that zone.

The situation in the rest of the UK is as follows:

The Prevention Zone in Scotland was lifted on 30 April 2017. There is no longer any need to keep birds housed or to have special measures in place if birds are kept outside.

The ban on gatherings and shows of poultry in Scotland and other birds will also end on 15 May.

The Prevention Zone in Wales was lifted on 30 April 2017. There is no longer any need to keep birds housed or to have special measures in place if birds are kept outside.

The ban on gatherings and shows of poultry in Wales will remain in place until further notice.

The Prevention Zone in Northern Ireland remains in place and is currently extended until 31 May 2017. Poultry and birds may be kept outside but the need for additional biosecurity requirements remain in place. These include keeping domestic birds away from wild birds, possibly by the use of netting and ensuring domestic birds are fed and watered inside, where wild birds cannot gain access. Other measures include ensuring very high levels of hygiene and cleanliness and not allowing visitors or movements of birds between sites.

Gatherings and shows of birds will also remain in place until further notice.

The easing of restrictions across much of the UK has been done following thorough risk assessments of the current situation by the relevant authorities; most notably the reduced risk from migratory birds. However, there is never any room for complacency with infectious diseases. Avian Influenza remains a notifiable disease and everyone is reminded to report any suspicious signs. It is always good practice to maintain high levels of hygiene and biosecurity with your birds.

Where wild birds, especially small groups of wild birds, are found dead they should be reported to APHA or the relevant veterinary authority for investigation.