The truth about loving a pug

Companion animal Vet Kathryn introduces her much loved pug, Poppy, and discusses the cost - emotional and financial - of owning a brachycephalic breed. 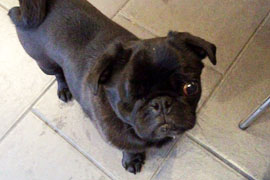 This is the story of my funny, affectionate, adventurous and loving little friend, Poppy Pug.

I rehomed Poppy when she was one year old. She had already lost an eye after getting her head stuck in a closing door. This type of injury is common in flat-faced dogs, because their skulls are so compressed that their eyes stick out further than normal. This makes them vulnerable to trauma and means there are less soft tissues to hold the eye in its natural position, so it is easily knocked out.

Poppy was also carrying some extra weight – in fact, she couldn’t be walked on a collar because her neck was wider than her head so it just fell off! Dog shows and social media often show hugely overweight pugs, making light of their rolls of extra skin, which means a lot of the general public simply don’t recognise a healthy body shape for these animals.

The extra fat around Poppy’s neck worsened her difficulty breathing. Flat-faced dogs very commonly suffer from Brachycephalic Obstructive Airway Syndrome (BOAS), which occurs because all the structures you would find in any other dog’s head are squashed into their much shorter skulls. Typically, this includes an overlong soft palate, which obstructs the windpipe, flabby vocal folds that collapse inward, and some dogs have extra bones within the nostrils that obstruct airflow there too.

Add to this the small nostrils and narrower windpipe often seen in these breeds, and it’s a wonder they get any air in at all! BOAS typically manifests as dogs snoring, learning to sleep with their head elevated so their neck is extended, or with a toy in their mouth, and often exercise intolerance and excessive panting (since dogs rely on heat loss through their airways to cool down, all the extra soft tissues mean they can’t do so efficiently and are prone to overheating). Alarmingly, only around 10% of owners of affected dogs recognise the snoring, snorting and quirky coping behaviours as abnormal, so BOAS often goes untreated. 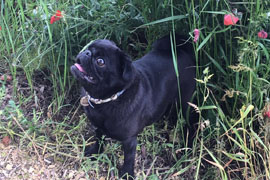 Even after dramatic weight loss (she lost 2.5kg – that’s equivalent to me losing nearly 4 stone!) Poppy was still badly affected, and a and a specialist veterinary surgeon operated on her airways. Under general anaesthetic she had her nostrils surgically widened, her soft palate shortened, and her tonsils and some of the soft tissues of her larynx removed.

She copes better now, but surgery can only change a small proportion of the abnormalities and she still suffers with BOAS. She prefers to sleep with her head on a pillow, snores, and has occasionally collapsed on very hot days.

The extra negative pressure required in her chest to pull air past the obstructions in her head and neck can sometimes also pull her stomach forward into her chest cavity, so Poppy and other brachycephalic dogs are much more likely to vomit than other pets, which can have serious consequences like pneumonia.

Like all pugs Poppy has wrinkled skin around her face. It can be seen as really cute, but it’s a chore keeping it clean. The folds trap bacteria and yeasts, and itchy and painful infections develop without good hygiene, so at least once a day she has a wipe around her facial folds. It’s high maintenance looking after her remaining eye as well.

Poppy’s eye still protrudes past the edge of her head, so it’s prone to trauma and she has had to be treated for corneal ulcers on several occasions. She also can’t completely close the lid, which means her tears aren’t spread over the full surface of the eye, and there is some scarring to the surface of the eye that is slowly getting worse. I can only slow this process down by applying drops several times a day.

I estimate Poppy has cost close to £8,000 in veterinary treatment in the 5 years I have owned her, and every day I still need to be strict with her diet, apply her eye drops, clean her skin folds, and keep her cool when it is hot. I also hope, as an owner, vet and above-all, dog lover, I can do my bit to make people considering buying a brachycephalic animal aware of the commitment involved.

I wouldn’t swap my pug for anything. She’s a charming little dog. But I do hope we as dog owners can start to talk more about the problems extreme conformation can cause, together raise awareness to improve the welfare of future generations, and encourage the public to consider healthier or cross breeds.

Pugs on Film - the problems of Pugmania in the media