A Grand Day Out! BVA Scottish Branch at the Royal Highland Show

BVA Scottish Branch President, Melissa Donald, gives us a rundown of her time representing BVA at the Royal Highland Show, and some crucial stakeholder engagement on behalf of Scottish members. 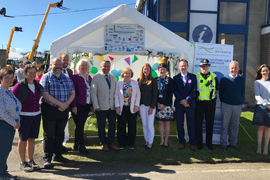 I have been going to the Royal Highland Show at Ingliston, Edinburgh on a reasonably regular basis since the year I graduated in 1987.

Until 3 years ago, it was mostly as a farmer’s wife, following said farmer around, especially along the Blackface sheep lines, bumping into someone we knew, standing around talking for 20 minutes, moving along half a row, bumping into someone else, talking again, maybe getting to see a few Limousin cattle and repeat.

I didn’t get to see much of the show itself unless I managed an escape from the above routine.

A new purpose – representing the veterinary profession in Scotland

Since my involvement with Scottish Branch, I have been going along under my own hat and although there is a certain amount of bumping into people, chatting, moving slightly on, chatting, inevitable after being in the industry for over 30 years, I also now realise what a lot of necessary work goes on.

When we no longer need these meetings or just have ‘People in Agriculture’ meetings, or when our daughters are no longer advised to marry a farmer to enable their dreams of working in agriculture, then we will have succeeded.

I spent a couple of hours helping out on the National Rural Mental Health Forum stand, situated right in front of the main ring. We gave out wrist bands, pens, leaflets and sweets to many school children who passed the stand, the idea being that they got dumped on the kitchen table once home and the parents saw what help was available if needed. I was impressed with how many primary school children had wellbeing mentioned at school.

The SSPCA were doing an amazing job at their stand. The staff there never stopped, encouraging children in, covering all animals and ensuring animal welfare education started early.

QMS (Quality Meat Scotland) stakeholder meeting covered Brexit (for a change) emphasising that it is the time to speak up NOW, not wait until the decisions are made. Work was also being done to encourage the next generation of meat eaters, it being the Year of Young People in Scotland 2018

EPIC hosted a session on the current BVD eradication scheme, updating us on current progress.

Whilst I was helping out on the International Sheep Dog Society stand, I got a chance to speak to Emma Harper MSP who is bringing out a government consultation on livestock worrying. Many of us have seen the devastating consequences of this and it was refreshing to see a government minister genuinely caring about animal welfare. BVA Scottish Branch will of course be feeding into this consultation, so watch this space and be sure to let us know your thoughts when the consultation document is released.

Next year… a more visible BVA Scottish Branch at the RHS?

Hopefully next year BVA Scotland can be a bit more visible yet as I’m sure many of you were there! Any ideas of what you would like as members are always appreciated, drop me a line on [email protected] .

After 2 days, I had to make my way home. I still haven’t managed to see most of the show (there’s always next year). Glasgow and Edinburgh Vet Schools have a presence there as do many other colleges and universities. The future of improved animal welfare has to be in education after all.

Veterinarian, Heal Thyself: How (not) to support vets with physical ill-health