As vets, we can influence responsible puppy buying decisions

As vets, we are in a prime position to promote responsible puppy buying practices. Our clinics are filled with caring, knowledgeable vet and nurse professionals who can educate clients and the public on breed health, canine health testing and buying a puppy responsibly.

It’s the start of a typical day in the life of a small animal vet. I’m consulting most of the day so, cup of tea in hand I go to scroll down the list of the day’s appointments before the clinic doors open and the clients start piling in. It has the hallmarks of a decent start to the day with my first consultation being listed as ‘new client, new puppy’. Honestly these are my favourite consultations. What is not to love about fresh new life in the form of mans’ best friend?

Anticipating a good start, I open the consult room door expecting to see smiling faces and a cute bundle of waggy-tailed fluff. I’m surprised to be met by a couple both with anxious faces carrying what looks like a very poorly puppy wrapped in a blanket. It’s a Westie puppy, “Martin” they’ve called him. He is painfully thin and has been having haemorrhagic diarrhoea since they got him yesterday afternoon. 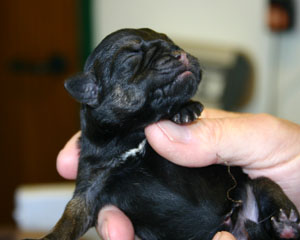 The rest of the story is all too familiar. The well-meaning and caring new owners had sourced their new pup off the Internet, from a popular classifieds advertisement website. They met with the puppy’s breeders in a house several hours away. They hadn’t seen any other puppies and had been told the puppy’s mother was staying with the seller’s parents while they weaned the pups. The new owners had felt rushed to make a decision and so they paid and took the puppy there and then. They confessed they didn’t know to ask about health checks, vaccinations or worming treatments and they hadn’t been given any paperwork.

Martin was in a bad way. He was admitted and predictably tested positive for parvovirus. He was small, underweight and although he had been sold as being eight weeks of age, he looked more like six-weeks-old. To our knowledge, he had never seen a vet or had any treatment for worms or external parasites. He had the added bonus of having a flea burden which was duly taken care of. Through the dedication of the veterinary team and not least the commitment of the new owners, Martin pulled through after several days and no small cost in veterinary fees and heartache for his new owners.

His new owners had tried to contact the breeders but they were no longer answering their phones, and so they were left with a bitter taste and an expensive start to new dog ownership.

I could give dozens of examples of puppies bought where no pre-purchase advice was sought beforehand, not least leading to heartbreak and long-term behaviour and health problems. Poor purchasing decisions, including choice of breed for the owner’s home and lifestyle and lack of knowledge about a particular breed’s welfare needs and common health problems, are also a concern for vets. And the rising popularity of breeds such as the French bulldog has given unscrupulous puppy dealers a captive market for lucrative sales with little concern for breeding with health over looks in mind.

As vets, we are in a prime position to promote responsible puppy buying practices. Our clinics are filled with caring, knowledgeable vet and nurse professionals who can educate clients and the public on breed health, canine health testing and buying a puppy responsibly.

The Puppy Contract is a resource that was created by the Animal Welfare Foundation and the RSPCA to be used as a tool to encourage responsible breeding and buying of puppies. It is free to use for breeders and buyers alike and works as a template to help buyers make an informed decision as well as showcasing breeders who are really putting health and welfare first and foremost when breeding their dogs.

Getting the message across

I hope the tale of “Martin” will become less and less common as we educate clients and work with breeders to utilise resources such as The Puppy Contract. Before Christmas last year, I noticed an upsurge in puppies being registered in the practice I was working in. I took great pleasure in meeting a couple who had used a puppy contract when buying their new Shetland sheepdog. Not only did they have a bright, sociable healthy puppy, they had all the paperwork to certify CHS eye health testing, microchipping and vaccinations as well as a welcome pack and the offer of ongoing support and contact you would expect from a responsible breeder.

In the past year, BVA has been working alongside stakeholders such as the SSPCA and Scottish Government to promote the Buy A Puppy Safely and Say No To Puppy Dealers campaigns. These are campaigns to raise awareness of the cruel and extremely poor welfare practices in which these pups are being reared before being sold to the unsuspecting public for vast sums of money often as part of a wider criminal network. The campaigns aim to educate the public on recognising a responsible breeder to try to influence buying behaviour towards healthy puppies from a trusted source

I will always look forward to my next new puppy consultation. I don’t expect our clients to know it all - we are there to educate, support and treat, but with increased engagement from the profession perhaps we can promote practices like using The Puppy Contract, which help our clients to buy healthy puppies and avoid fuelling irresponsible puppy breeding and selling practices.

What should you consider when buying a puppy?

Thinking of buying a puppy? Here are some top questions to ask breeders to avoid heartache