Making the point on stick injuries in dogs

When Maya the smooth collie was treated for a stick injury at a Glasgow veterinary practice, no one predicted that days later her case would spark a national discussion about the dangers of throwing sticks for dogs. Maya got a 10cm (4in) stick lodged in her throat, puncturing her tongue and damaging her larynx.

When Maya the smooth collie was treated for a stick injury at a Glasgow veterinary practice, no-one predicted that days later her case would spark a national discussion about the dangers of throwing sticks for dogs.

Maya got a 10cm (4in) stick lodged in her throat, puncturing her tongue and damaging her larynx.

Her story attracted the attention of the Scottish press and BVA Scottish Branch President, Grace Webster, provided a strong and clear quote about the “horrific injuries” that can be caused by throwing sticks for a dog. The next day (Wednesday 20 January) the story, along with previous advice from former BVA president, Robin Hargreaves, was on the front page of The Times.

BVA’s press office in London began taking calls at around 7am and at 8:30am I, as President, was in the BBC Radio 4 Today programme studio at New Broadcasting House. BVA’s messages were clear:

Mishal Husain asked if I would attempt to stop a dog owner from throwing sticks if I saw this happening. I replied that this may not always be appropriate, but it gave an opportunity to highlight the benefits provided by local veterinary practices who routinely issue such advice through waiting room displays, press releases, social media and practice newsletters.

Today was followed by interviews for ten regional BBC radio stations, along with an interview for the Press Association which distributed the story widely.

During this time, social media was reacting to Lorraine Kelly’s dismissive treatment of the story on Good Morning Britain, with vets and vet nurses posting photographs of severe stick injuries they had treated. There were hints of 'nanny state' and 'health and safety gone mad' during the day’s interviews, but these were overwhelmingly countered by the many shared experiences and widespread support from dog owners.

BVA President Sean Wensley talks to The Today Programme on BBC radio 4 about injuries to dogs caused by playing with sticks. 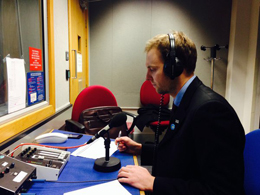 Sky News TV covered the story live at lunchtime, followed by Radio 2’s Jeremy Vine show who also interviewed Sarah Stevenson, the vet from Bishopbriggs Veterinary Centre near Glasgow, who had treated Maya. Sarah gave an excellent description of Maya’s injuries and a compelling case for why sticks should be avoided.

We used the taxi journey to call BBC News Online and the Guardian. A BBC employee accompanying me to the studio told me about the injuries her dog had sustained from a stick and thanked us for raising awareness.

A strong voice for vets and animal welfare

A slot in the studio for Channel 5’s evening news closed the day, by which time BVA’s press team had secured coverage in almost 300 international, national and regional media outlets (including the Japan Times and New Zealand Herald!).

The combined reach of our coverage was remarkable, all conveying our profession’s expertise in treating these wounds, and our concern for preventing them to protect animal welfare.

Many colleagues played a role, not least BVA’s press team who organised the day expertly, for which I am extremely grateful. My favourite tweet of the day was from @JoeChurcher:

“I'd be one shouting "nanny state killjoys" if I didn't know lots of sensible, dog-loving vets who agree: no sticks.”

Catch up with all the tweets surrounding #stickinjuries on see a summary of our work below.