Megan, a Dogs Trust Canine Carer shares a first-hand account of what it takes to rehabilitate puppies rescued from the horrors of the illegal puppy trade.

In early 2019, BVA and Dogs Trust issued top tips on responsible puppy purchase for prospective owners, after statistics from BVA’s Voice of the Veterinary Profession showed that French Bulldogs and Pugs topped the list of dog breeds vets most commonly suspected of being imported illegally into the UK. The statistics mirrored findings from Dogs Trust’s latest puppy smuggling investigation, which reported that 63% of puppies intercepted at the British border as part of the Puppy Pilot scheme between December 2015 and July 2018 were French Bulldogs, Pugs, English Bulldogs and Dachshunds.

Our position on pet travel calls for more robust regulation to ensure travel routes are not abused for purposes that negatively impact on animal health and welfare, such as through illegal puppy import. Here, Megan, a Dogs Trust Canine Carer, shares a first-hand account of what it takes to rehabilitate puppies rescued from the horrors of the illegal puppy trade. 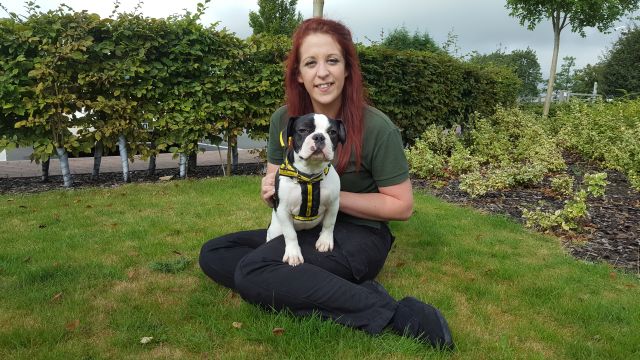 In response to the number of puppies being brought into the UK either underage or without appropriate vaccinations and paperwork - putting them and the existing dog population at risk -  Dogs Trust felt it essential to intervene. The Puppy Pilot was launched by Dogs Trust in December 2015 to provide care and support for illegally imported puppies during their time in quarantine. By funding the care of the puppies, the relevant agencies are empowered to seize illegally imported puppies knowing their fate will be secure.

Since late 2015, the Puppy Pilot has seen 1,433 puppies intercepted at the border on their way into Great Britain. Of these, 60% were deemed illegal and were placed into quarantine. After they complete their time in quarantine kennels, the puppies are moved to Dogs Trust rehoming centres to start the search for their new families.

As a canine carer, I see first-hand how the demand for desirable breeds such as French Bulldogs, Dachshunds, English Bulldogs, and Pugs, is mirrored by the dogs coming through the project. Through the Puppy Pilot, we saw a staggering 63% of dogs cared for between December 2015 and July 2018 belonged to one of these four breeds. Dogs Trust’s fourth report into the illegal importation of puppies last year uncovered Serbia as an additional new origin country for these dogs. This was the first time the charity had found evidence of a non-EU country as a source for illegally imported dogs into EU countries for sale.

Horrors of the illegal puppy trade

Puppies as young as eight weeks old were made to endure 30+ hour journeys with insufficient stops for food, water or toilet breaks. In the hands of experienced canine carers, the puppies are given the opportunity to catch up on the missed socialisation that is key to the early development of all dogs. Preparing the puppies for their new homes includes getting them used to different environments and noises, and even learning to love wearing their first ever collar.

Many of the dogs leave a lasting impression, perhaps none more so than the recent litter of Bernese Mountain Dogs that had been seized on arrival into the UK late last year.

I’m used to seeing smaller breeds coming through the Puppy Pilot, so I was very surprised when five Bernese came bounding through the doors! They brought such a smile to all our faces, despite the tough start they have had in life. I was delighted to help them on the final stages before they were paired with their forever families and it’s so nice knowing that we were able to play a role in helping change their fate.

I absolutely love watching the progress and development of the puppies we care for. It’s horrible to think of what they’ve been through. Many of them thrive when having lots of attention and cuddles, but for some it’s a bit of a slower adjustment process. Some of these puppies were separated from their mum at far too young an age or have missed out on key stages of socialisation and habituation, but we’re very happy to help fill in those gaps and set them up for their new homes.

All of this first-hand insight highlights why we are asking for the public’s to help put an end to this cruel trade. In most instances, owners are unaware of the horrors of their puppy’s early life, which is why Dogs Trust and BVA are encouraging prospective dog owners to carefully consider where they get the puppy from.

Make sure you ask lots of questions, and expect to be asked lots in return, see the puppy with their mum and siblings in the home and on more than one occasion. Never feel pressured into making a puppy purchase. Walk away if you have any concerns and make sure to report any suspicions to your local Trading Standards office.

For more information about the Puppy Pilot and how you can help put an end to this cruel trade, visit Dog Trust.