Many pet owners have written in over the past few days to share concerns regarding our advice against importing stray dogs from abroad. Here we’ve compiled answers to some of the most common questions we have been posed regarding disease risk. 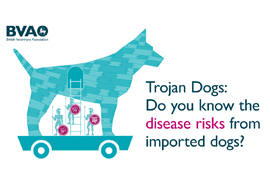 Many pet owners have written in over the past few days to share concerns regarding our advice against importing stray dogs from abroad. Several have questioned the evidence behind dog-to-dog or zoonotic transfer of exotic diseases.

We recognise and understand why many animal lovers in the UK are opting for rescuing stray animals from other countries and giving them loving homes here, but as vets we are very concerned about the inadvertent, long-term consequences of this for the health and welfare of UK’s pets as well as humans.

BVA’s advice regarding dog import is based on current scientific evidence around the risks posed by imported dogs with unknown health histories. It follows from the strength of feeling on the issue among our 17,000+ members, who have conveyed their concerns through our Voice of the Veterinary Profession survey as well as via practical experience in practice.

With the steep increase in the number of dogs being imported into the UK from countries that are currently positive for diseases not traditionally seen here, the risk of vector infestation in the UK or pathogen transmission from trojan dogs to the wider pet population or humans remains very valid.

BVA therefore feels it is important to raise awareness of this and other exotic disease risks among prospective dog owners. We cannot recommend importing a stray dog from abroad and would instead advise rescuers to consider supporting national charities within the dog’s country of origin.

We would encourage people to support UK charities such as the Dogs Trust, who are working to raise awareness and improve the lives of stray dogs in countries outside the UK, and to consider giving a forever home to any of the thousands of dogs within the UK in need of a home.

We are also asking the government to take on board these and other recommendations to make pet movement regulations stricter. Below, we’ve compiled answers to some of the most common questions we have been posed regarding disease risk.

Why are we calling for stricter pet movement legislation?

We strongly believe that any movement of pets must ensure that animal health and welfare, and public health, are protected, and travel routes are not abused for purposes that negatively impact on animal health and welfare. That is why, apart from issuing advice to owners, we have also called upon the government to introduce compulsory tests and more rigorous checks for both commercial and non-commercial pet movement.

We are concerned that many of the dogs being brought into the country for rehoming purposes are coming via the Pet Travel Scheme as opposed to the legally required commercial route, which requires stricter health checks. Current pet travel requirements under the EU Pet Travel Scheme, for instance, a rabies vaccination followed by a 21-day waiting period, bear no relation to the incubation period for the disease.

Our pet travel position statement contains 16 recommendations for the government, including:

Before the EU Pet Travel Scheme came into effect in 2012, dogs entering a rabies-free country such as the UK had to be microchipped, vaccinated against rabies, blood tested a month later and were only allowed to travel six months after the date of the successful blood test (with a compulsory tick and tapeworm treatment 24 to 48 hours before entry). After January 1, 2012, dogs had to be microchipped, vaccinated and were then allowed to travel three weeks later with tapeworm treatment 24 to 120 hours before travel.

The 3-week wait after a rabies vaccination is to allow the vaccine to stimulate the dog's immune system and bears no relation to the incubation of disease. The main challenge here is posed by a dog with unknown health history, since, from a disease perspective, it may already be incubating disease, so vaccination will have little or no effect.

Isn’t the tick responsible for canine babesiosis already present in the UK?

In the case of babesiosis, the two main tick vector species- Dermacentor reticulatus andRhipicephalus sanguineus (or the brown dog tick)- are present in the UK but are uncommon. The UK had been considered free of endemic B. canis infectiondespite the presence of its vector, D. reticulatus. The increase in pet imports in the last few years has increased susceptibility to this pathogen establishing itself in the UK, as was seen in four untravelled dogs in Harlow, Essex in 2016 and 2017.

There is also evidence that the second vector, the brown dog tick, historically unusual in Britain, is now surviving in localised environments and it is increasingly reported as being imported via travelling dogs. A 2016 paper published in the Vet Record documents 40 importation cases involving the brown dog tick on recently travelled or imported dogs into the UK since 2012, including four in dogs that had been treated for ticks before entering the UK.

The paper also notes that house infestations have only so far been associated with imported dogs rather than travelling pets. This indicates that dogs rehomed from brown dog tick-endemic countries should be considered as a high-risk group for house infestations and possible disease transmission. Finally, it is also important to note that B. canis can be transferred by blood transfusion between dogs.

All of this evidence makes it important for us to raise awareness of the disease risk associated with importing dogs from countries endemic for babesiosis.

Are there any known cases of leishmaniasis transferring from one dog to another or from a dog to a human?

With respect to canine leishmaniasis, we are not looking to overemphasise the risk of direct zoonotic transmission from dogs to people in the UK, and we know that the vector (sandfly) isn’t present in this country. However, we believe it unwise for the most vulnerable people – the very young or the immunocompromised (for example, people living with HIV and those on immunosuppressive drugs)– to have close contact with a Leishmania-infected dog.

Between dogs, there is evidence to show that the parasite can be transmitted vertically (from a female dog to its pup), venereally and through blood transfusions of infected donors. There have been confirmed cases of leishmaniasis in dogs in the UK with no history of travel, and in the US there have been outbreaks in kennelled dogs. In 2016, researchers reported the first suspected direct dog-to-dog transmission through bite wounds from a naturally infected dog in Germany. So, while direct transmission between dogs in close contact is rare, it is possible, and with an increase in numbers of infected dogs in the UK, the probability of disease transmission rises.

It is also important to consider the risk of the vector, the sandfly, moving with climate change - the WHO notes that changes in temperature, rainfall and humidity can affect the sandflies and reservoir hosts by altering their distribution, survival and population size.

For more information on Leishmaniasis, see the BSAVA’s guide on the subject.

Are you also issuing advice for British dogs going abroad for holiday?

We regularly issue advice for pet owners looking to take their dogs abroad for a holiday, to ensure they are aware of the risks and have consulted their vet for preventative treatment, including non-compulsory tick treatment. The latest communication we issued on the subject is available on our website.

Dogs travelling abroad from the UK may be exposed to diseases to which they are susceptible, but this is considered to be of low national impact (though serious for the individual dog in question). Current research suggests that the threat from non-clinically but chronically infected dogs coming to Britain and acting as a source of endemic infection in the UK is higher.