We look back on the story of women in the veterinary profession through the prism of six RCVS Knowledge archive documents.

This time 100 years ago, the passing of the Sex Disqualification (Removal) Act threw open the doors of the veterinary profession to women, who had previously been excluded due to their sex. This landmark development provides a fitting point to reflect on the story of women and the profession through the prism of the RCVS Knowledge archives.

Fundraising letter from the People's Dispensary for Sick Animals, 24 Sep 1930 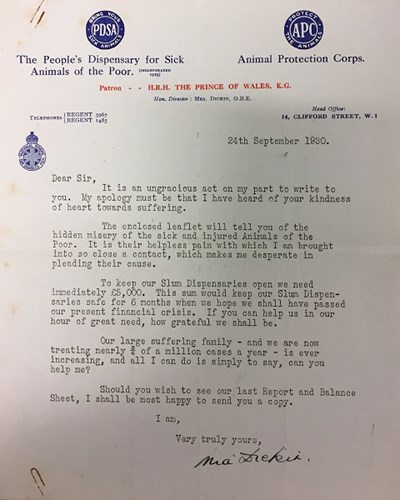 Firstly, women were making a contribution to animal welfare long before they were admitted to the veterinary profession. In 1917, social reformer Maria Dickin (1870-1951) founded the People's Dispensary for Sick Animals (PDSA) in East London, which soon expanded across the country, treating for free the pets of those who were unable to afford veterinary treatment.

Although controversial at the time, the work of the PDSA was formally recognised and defined by Acts of Parliament in 1949 and 1956.

Draft letter to Aleen Cust from George Thatcher, Solicitor to the RCVS, 22 Apr 1897 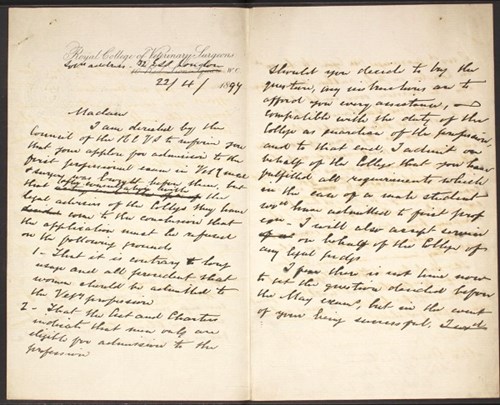 Aleen Cust (1868-1937), on the other hand, waited 25 years for official recognition by the veterinary profession, as described in a recent RCVS Knowledge article in the Veterinary Record (185, 290-295).

In 1897, the Royal College of Veterinary Surgeons (RCVS) refused Cust's request to sit the profession’s entrance examination, on the basis that 'it is contrary to long usage and all precedent that women should be admitted' and that 'the Act and Charter indicate that men only are eligible'.

Aleen Cust's signature in the RCVS Roll of Members 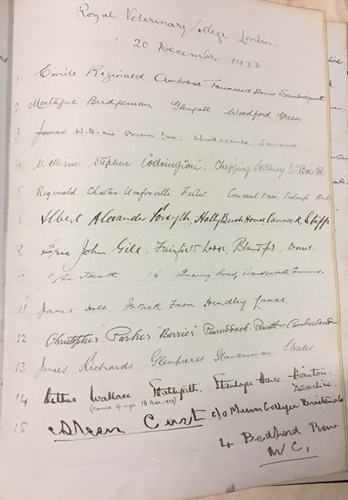 After the Sex Disqualification (Removal) Act forced the RCVS’s hand, Aleen Cust was quick to apply again to sit the examination, and on the 20 December 1922 she passed and signed her name in the RCVS Roll of Members, becoming the first official female vet in the UK.

Letter from Fred Smith to Fred Bullock, Secretary of the RCVS, 11 Feb 1923

Pockets of the profession, including some vet schools, remained resistant however, a stance described by retired military vet and author Fred Smith as 'against the spirit of the age'.

In his letter he wrote, 'How can Camden Town keep out women students...? It is against the spirit of the age. I am not sure that it is not against the Act of Parliament.' 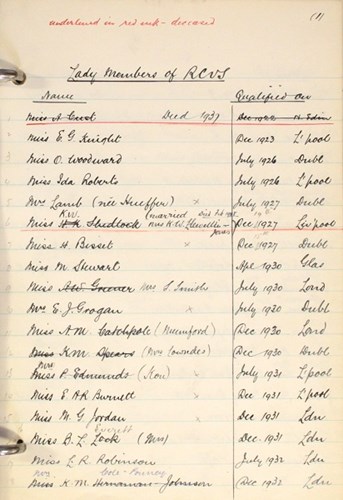 However, over the following decade, more women graduated from vet schools and by 1932 a further 20 women were members of the RCVS.

Returned results from the Election of Council Members in 1968 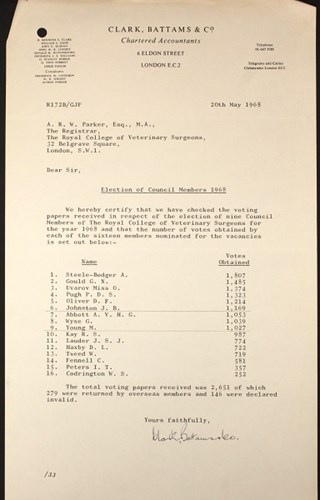 Another milestone was reached in 1953 when Joan Joshua (1912-1993) became the first woman to be elected to RCVS Council. Olga Uvarov (1910-2001), head of the veterinary advisory department of Glaxo, became its second female member in 1968, and the first female President of the RCVS in 1976.

After a slow start, women became the norm rather than the exception in the profession in 1989, when more women graduated with a veterinary degree than men for the first time. This has been the case every year since.

At RCVS Knowledge we are fortunate to hold archive material from Olga Uvarov, and other eminent female veterinary surgeons including Connie Ford (1912-1998), a specialist in cattle infertility and member of the government Veterinary Investigation Service, and Barbara Weaver (1927-), a pioneer of veterinary anaesthesia, with a distinguished career at the University of Bristol.

To delve further into these and other fascinating stories from the veterinary profession’s past, visit rcvsvethistory.org or contact the RCVS Knowledge Archives team at [email protected].

Lorna Cahill Bannister is the Archivist for RCVS Knowledge, leading the Vet History project to catalogue and digitise the historic collections of the Royal College of Veterinary Surgeons.