All you need is love: improving veterinary wellbeing

I invited Sir Anthony Seldon to speak at BVA Congress because I felt he would have an interesting, and perhaps slightly controversial, take on undergraduate education and the problems of stress and mental ill health amongst our student body in veterinary medicine.

The unusual nature of his presentation was immediately apparent when the session started with a 10 minute deep breathing and meditation exercise. After he failed to get a taxi from the station, arrived 10 minutes before the off and we lost each other in the commercial exhibit at London Vet Show, it was just what I needed!

Sir Anthony was master of Wellington College until earlier in 2015 and he is now vice-chancellor of University of Buckingham (the first private university in the UK).

In a wide ranging discourse on education mental health and the nature of happiness, there were a few stand out points that I have brought back with me to work.

We choose our state of mind

The core of Sir Anthony's philosophy is that what ever state of mind we find ourselves in, it is a result of choices we have made. Happiness is in effect a state we can chose, if we are unhappy we have chosen to be. This seems harsh and was challenged from the floor with the example of vulnerable children in failing families but he could not be deflected from his central tenet. He contended, very firmly, that he absolutely rejected the status of victim. For anyone.

He referenced the ABC method of stress management:

As I understand it, if you can alter your belief you can alter the consequence. I have been trying to apply this thinking to my work this week back in the practice.

Applying the ABC method in practice 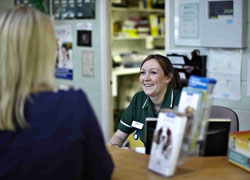 If a client or a colleague or perhaps a patient does something, says something or indeed just responds in some way that instinctively frustrates, aggravates, embarrasses or disappoints, I have tried to hold it at the B stage and see if there is another 'belief' or perspective that will allow a less negative interpretation.

For instance; a client delays getting attention for a sick pet. Maybe they didn't want to look foolish for over worrying or maybe they thought they might be wasting my time, or maybe they were worried they could not afford the consequences and didn't want to ask for credit. All more positive than being unconcerned about the welfare of their pet.

A classic example is the request to call a client about a 'complaint'. If I can 'believe' that from their perspective things have not gone as they expected, maybe I will be able to approach the call in a more positive frame of mind than if I start out just thinking they are vexatious or only concerned about the fee.

Early days, but actively thinking about my responses to events and why I might be feeling that way has given me pause to think again, more than once.

Sir Anthony feels very strongly that education should be a joy that young people clamour to engage with, not something they feel desperate to put behind them. He sees that to achieve this we need a more compassionate and sympathetic system that is less about pure measured attainment and more about nurturing, recognising individual worth and setting an example of kindness in teaching.

He cites his own school's improvement in exam performance under a regime including meditation and a focus on individual wellbeing as an example of what can be achieved. He would not suggest it is quite this simple but at the centre of his philosophy "all you need is love!"

If you are an employer, take a look at our employee wellbeing guidance with advice on how to manage work-related stress.

Robin is a director and small animal practitioner at Stanley House Veterinary Surgery in Lancashire.