Brachycephalic CT scans – the science behind the shock factor

In this blog, Dr Clare Rusbridge and Dr Penny Knowler give us a master class in CT reading, and explain exactly what these CT scans mean for the health and welfare of brachycephalic breeds.

What is brachycephaly? Brachycephaly comes from the Greek meaning short head and in dogs, cats and rabbits describes skull and facial bones that are shorter than normal. 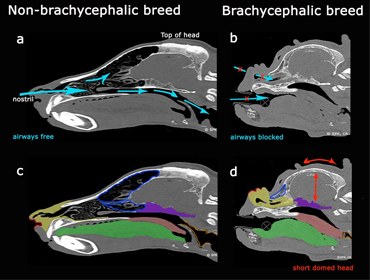 The upper panel (A, B) is the version of the CT scans a vet would normally be presented with. We’ve added some coloured labelling to the same CT scans on the versions underneath (C, D) to help us illustrate just how the brachycephalic head shape can impact on the health and welfare of these breeds.

First a few basics to get started with, on the uncoloured CT scans “white” is the bones of the skull and upper neck. Grey is the so called “soft tissue” which includes the structures of the nose, palate, tongue, larynx and brain. The black is air.

So, what do the colours mean?

Evidence has shown that this rounded head shape is one of the reasons why brachycephalic dogs are so attractive to us humans. Their head shape is more baby-like and therefore desirable. Other brachycephalic features accentuate those doll-like features.  The eyes, for example, are more toward the centre of the “face” and appear larger because of a combination of shallow eye sockets and less eyelid coverage.

And what does this mean for brachycephalic dogs?

This change in head shape (conformation) has dire consequences for the brachycephalic dog. The soft tissues (the grey areas) do not follow the bone structure and the same amount of tissue found in non-brachycephalic dogs fills and obstructs the airway. In the bottom panel C and D, compare the tissue (grey area) around the nasal passage (yellow). This dog cannot, or has severely restricted, breathing through its nose. Consequently, the dog must open its mouth to breathe but even that airway is obstructed by a tongue (green) and soft palate (pink) that is compressed to fill the reduced space. The soft palate pushes back on the larynx (orange) further obstructing the airway.

To make matters worse the nostrils are small (red) and so is the larynx (voice box) and trachea (windpipe) meaning that less air can get into the lungs – like breathing through a narrow and obstructed straw. The increased effort in breathing causes inflammation of the soft palate and larynx and this swelling further obstructs the airway. Less severely affected dogs may have noisy open-mouthed breathing and snore at night. Severely affected dogs have sleep disturbance, cannot exercise and are distressed and can even go blue.

Brachycephalism can also result in eye and brain problem. The more exposed eyes are liable to trauma and ulceration. Sometimes, despite the compensation measures of the growing skull to accommodate the brain, there is just not enough room and pressure on the brain and spinal cord causes signs suggesting head and neck pain (Chiari malformation) or even more severe neurological problems such as the severe spinal cord disease syringomyelia.

What do we do about it?

The difficulty with dealing with the problem of brachycephalism is the same as the reason that these dogs are bred and purchased in the first place. Many people find them adorable, they have attractive personalities and, of course, we love our dogs, whatever the breed. However, prospective owners should be aware of the problems with these breeds - problems that are costly in veterinary visits and in terms of welfare.

If you’re thinking about getting a dog, speak to your local vet about your choices before you do and if you already have a brachycephalic breed that you think might be suffering from these problems, discuss options to improve their health and welfare with your vet. As dog lovers, we all want the same thing – healthy, happy dogs.