The most challenging part of my career was taking on the presidency of BVA. Having not been in practice for the best part of 35 years, I had to learn about many aspects of veterinary medicine that I was not familiar with or had forgotten in order to try and do the job well; I'll leave others to judge whether I succeeded or not! 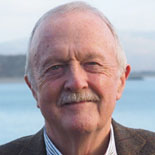 Telling our stories, making our own history
LGBT History Month

Qualified as: a veterinary surgeon from the University of Liverpool in 1971

Area of work: I spent several years in general practice in the UK and Canada before joining the pharmaceutical industry in the animal health sector. I've held a number of senior appointments in research and regulatory affairs in multinational companies, working across Europe and the United States. I was then appointed by the European Commission as the Head of the Veterinary Division at the European Medicines Agency (EMA). I currently run my own consultancy in medicines regulation and my clients have included GALVmed and the Bill and Melinda Gates Foundation. I have served as a member of the Defra Committee on Antimicrobial Resistance (DARC) and the Medicines Committee of the Federation of Veterinarians in Europe (FVE). I also became BVA President in 2012. In 2016 I became High Sheriff of Gwynedd (Uchel Siryf Gwynedd) in North Wales where I live with my civil partner Michael.

What inspired your path into the veterinary profession?

I had a respect for animals from the earliest times I can remember. I was also inspired by spending summer holidays with my cousins on a farm in North Wales and watching the vet going about his work, talking about how to become one.

What has been the most challenging part of your career?

The most challenging part of my career was taking on the presidency of BVA. Having not been in practice for the best part of 35 years, I had to learn about many aspects of veterinary medicine that I was not familiar with or had forgotten in order to try and do the job well; I'll leave others to judge whether I succeeded or not! I am nevertheless very proud that my profession would elect me as a gay man, as the head of its professional association.

What has been the best part of your career so far?

The best part of my career was being appointed as Head of the Veterinary Division of the European Commission's European Medicines Agency (EMA) in London when it first opened, and being responsible for building up a team of animal/veterinary scientists from throughout the EU to create what is now regarded as one of the world's leading medicines regulatory agencies. It was at the EMA, working with a wonderful multinational team of colleagues that just shy of my 50th birthday I finally found the courage to come out at work. I truly felt liberated.

What are your proudest achievements of your career?

I guess without sounding too pompous, there have been a few proud moments in my career:

What advice would you offer to someone experiencing difficulty with their sexuality or gender identity?

Be proud and never blame yourself. Identify friends and colleagues you can trust and talk to. Tell someone especially if you are experiencing bullying or prejudice and keep a record - always useful if you need to ask for help.

What advice would you give to your younger self and why?

I'd tell myself not to be scared of coming out because, with very few exceptions, all my family and friends stood by me.