Vets unite to march in Pride

A huge amount of planning had gone into 25 June 2016 the date the veterinary profession would march together in a UK Pride event for the first time. However, the day didn’t exactly start as I had planned. 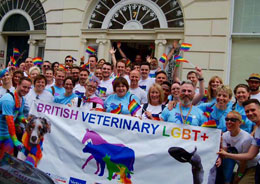 A huge amount of planning had gone into 25 June 2016 - the date the veterinary profession would march together in a UK Pride event for the first time. However, the day didn’t exactly start as I had planned.

As the numbers of people wanting to join us in the Pride parade had increased, it had proved quite a challenge to get enough wristbands for everyone, but after a few strongly worded emails we got enough. So you can imagine my frustration as I arrived at BVA's offices to discover that I'd left the 80 wristbands at home. An hour and a half later, I returned a little flustered, with wristbands in hand.

Lucky to be part of an LGBT+ community 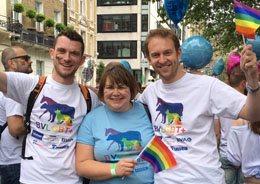 What I returned to made all the hard work worthwhile. There were around 50 people gathered at BVA, some I'd met before and some I'd only talked to through our BVLGBT+ group. Everyone was enjoying themselves, chatting, making new friends and getting ready for the parade. It was great to see BVA President Sean Wensley and British Veterinary Nursing Association President Sam Morgan, showing their support too.

I’d prepared a few words to say about BVLGBT+ one year on since the group formed. I also mentioned the importance of Pride events for the LGBT+ movement, especially given the recent tragedy in Orlando. What I didn't expect was how emotional I'd feel saying those words. Seeing everyone gathered together and feeling passionate about what we were doing, really hit home and it struck me how lucky we are to be part of an LGBT+ community.

A strong LGBT+ message from vets 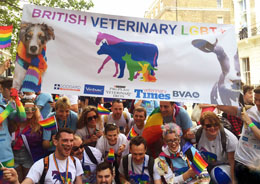 After the brunch we headed out to find our position on the parade route. It's hard to fully describe the incredible feeling of marching in a Pride event, and what was so rewarding this year was to see 80 members of our group experiencing this together. The route is lined with people, 10 deep in places, all cheering us on, shouting support, offering high fives and blowing whistles. There was an overwhelming feeling of love and happiness.

The crowds responded very positively to the vets being there, I think we got the loudest cheers, but this could be wishful thinking.

It was a culmination of a year’s work, and well worth it to see our profession gathered under the same banner. On Saturday 25 June 2016 the veterinary profession joined the LGBT+ stage, sending a strong message about the normality of LGBT+ individuals in society.

After the parade, the rain began and we took shelter in a pub. Many drinks were had and many friendships were formed. There was also a lot of talk about next year’s Pride and how we can make it bigger and better, with people wanting floats and balloons. I guess we'll have to form another subcommittee!

It'll be incredibly exciting to see what the next 12 months hold. 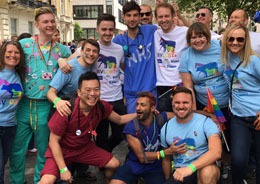 BVLGBT+ would like to say a huge thank you to our sponsors, BVA, VetTimes, Purina, Virbac and the Goddard Veterinary group for their support and making Pride such a successful day.