A recent spike in cases of illegal ear cropping points to the need for urgent action by the veterinary profession and the wider public to curb this worrying trend. Please note, this blog contains graphic images some may find upsetting. 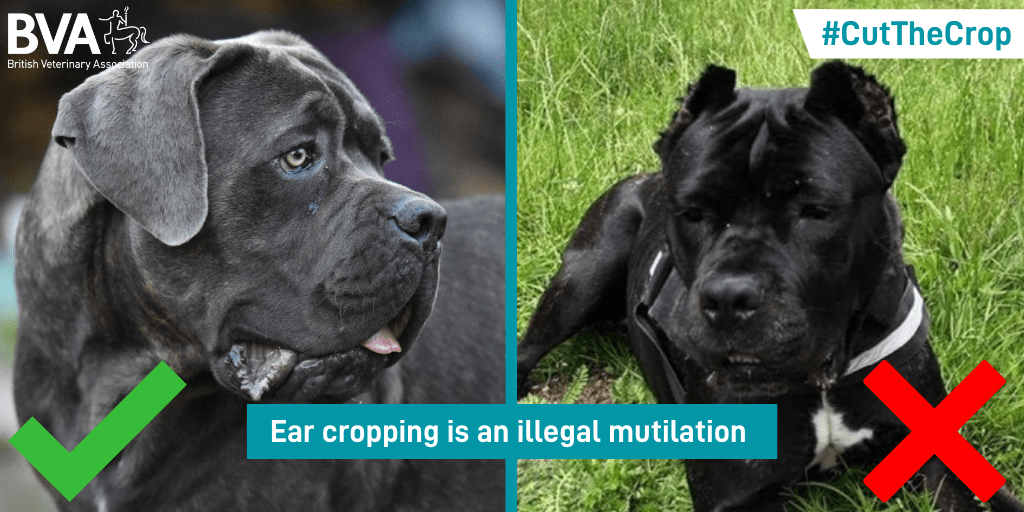 Last summer, I had a client come in with two American bulldog puppies for a routine health check. Both puppies were about four months old and from the same litter. Both also had ears that had been cut down to little stubs.

Although the wounds had healed, I asked the owner what had happened. The only information they could provide was: it was “done abroad” before they had bought the puppies. As they were old enough to have been legally imported, this explanation was plausible, but I still felt very uncomfortable and explained to the owner why cropped ears were illegal in the UK.

Sadly, this isn’t a one-off case. In recent years, vets in the UK have seen a dramatic increase in the number of dogs with cropped ears, marking a frightening trend towards the normalisation of a mutilation that is horrific, unnecessary, and rightfully illegal in this country.

A cosmetic procedure with no benefit for dogs 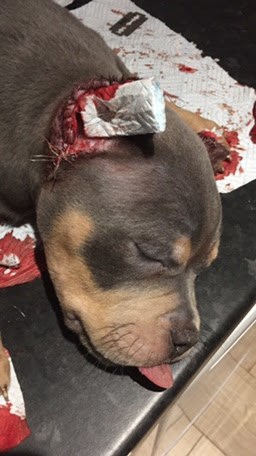 Ear cropping is a surgical procedure where the floppy part of a dog’s ear is cut off, often without anaesthesia or pain relief. In many cases, the ear stump is then attached to a hard surface in a process known as splinting, to ‘shape’ them upright whilst they are healing.

Ear cropping is carried out purely for cosmetic reasons, to make dogs look ‘harder’ or ‘tougher’. I want to be clear that there is no benefit to the dogs involved. In fact, it severely compromises their welfare. The procedure itself is painful, as it cuts through cartilage, and it can take weeks to heal, with pain every time the bandages are changed. There’s also a risk of the puppy catching an infection during the process.

Some people claim there are health benefits to ear cropping, but these are simply not true. Ear cropping does not improve a dog’s hearing or prevent ear infections. Many of the breeds that have their ears cropped, such as Dobermans and American bulldogs, are not those we would consider at an increased risk of infection.

Changing the conformation of a dog’s ears impacts its ability to communicate. We’ve all seen dogs communicating with their facial expressions, including ear movements; this natural behaviour is inhibited by cropping.

In short, there are rarely any medical reasons why a dog would need both its ears cropped. Overwhelmingly, the procedure is simply carried out to change a dog’s natural appearance for human satisfaction.

How is it happening?

The RSPCA has reported a massive 236% increase in the number of reports of ear cropping that they’ve received in the last five years.

This rise in numbers may be fuelled by the increase in celebrities and social media influencers showcasing their cropped-ear dogs on platforms like Instagram, leading to the glamorisation and normalisation of this barbaric practice.

But it’s illegal in the UK, so how is it happening?

We know there will be some cropped rescue dogs being given a new home in the UK, or families who own cropped dogs relocating here. But these are small numbers, and our concern is that these excuses are being used as a veil by unscrupulous sellers. A lot of the cases we see in practice are very young puppies – so they are either being moved illegally (the legal import age is 15 weeks) or buyers and vets are being lied to.

Recently it’s come to light that unscrupulous breeders are carrying out this abhorrent procedure illegally in the UK, using crude instruments or DIY ear cropping kits bought online, likely without any anaesthesia or pain relief. And for what? A tough looking dog with little regard for the pain and suffering it causes them.

Ear cropping is illegal and it’s time for action to stop it happening in the UK. The government needs to work with vets and animal welfare charities to find an effective way to stop this abhorrent practice.

There are calls for a ban on the importation of dogs with cropped ears. This is a clear call to action, but we need to make sure the structures are in place to enforce it and we need to think about the impact on legitimate movements, such as families relocating. By putting our heads together I’m sure we can come up with the right solutions for animal welfare.

We need to educate ourselves and each other. We have to stop normalising this mutilation. Celebrities who post pictures with their cropped dogs need to be called out for perpetuating the trade and told to #CutTheCrop

Members of the public can report incidents of people carrying out ear cropping or arranging for dogs to be cropped abroad by calling the RSPCA at 0300 1234 999 (in England and Wales), the Scottish SPCA at 0300 0999 999 (in Scotland), and your local council Animal Welfare Officer (in Northern Ireland).

How can vets help?

It’s important to remember that as vets, we’ve taken an oath to protect the health and welfare of the animals under our care. Under the RCVS Code of Professional Conduct, vets and vet nurses can break client confidentiality and disclose information to the authorities where it is deemed necessary, including where ‘animal welfare or the public interest is compromised…or where the information is likely to help in the prevention, detection or prosecution of a crime.’

If you’re a veterinary professional and you’re concerned about cases of ear cropping or illegal importation that you’ve seen in practice, you can report these concerns to your local authority animal health and welfare team.

We must all speak up, speak out and take action to #CutTheCrop.

With thanks to RSPCA for providing images.