Winners of the Veterinary Photographer of the Year 2017 announced

Following the success of the inaugural photo competition, and over 500 entries, we are pleased to announce the winner of this year's Veterinary Photographer of the Year competition.

Since joining at BVA in May, I’ve had the pleasure of project managing the second annual BVA photo competition. Following the success of the inaugural competition last year, we had over 500 entries that showcased the life of our members, including their professional successes and bond with patients.

We were lucky enough to have George Stoyle - British Wildlife Photographer of the Year - as our photographic and technical expert judge on our panel, as well as BVA Junior Vice President John Fishwick, Veterinary Record Assistant Editor and Photographer Gill Harris, and Association of Veterinary Students Senior Vice President Hannah Mason. The standard of this years’ competition was incredibly high, and it took our judges over 4 hours to decide on the winning image. Winning images were chosen based on their technical excellence, originality, and how much they fulfilled the brief. 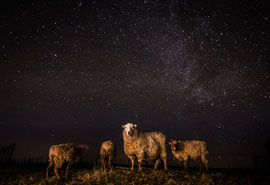 Mixed-practice vet Jen Rowland won the Wonderful World of Animals category with her photograph of rare and native North Ronaldsay and Dartmoor sheep grazing under the Milky Way in Northumberland.

Jen, a recent graduate who works in Aberdeenshire, Scotland, said:

"I am completely shocked and delighted to have won this competition and it has definitely inspired me to get out with my camera more often. I was very lucky to get this shot as it was a single thirty second exposure - I had some very cooperative models."

"Jen Rowland has clearly put some thought into her photo and has shown skill in its execution. From a technical perspective, the exposure used for the sky is just long enough to make the stars visible whilst minimising star trails, and artificial light has been used just enough to highlight the sheep and the rest of the foreground.

"The entire scene along with the ragged appearance of the sheep gives the image a feeling of wild, remote, windswept moorland, which I love." 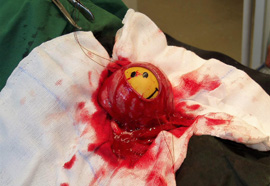 Mandy Knight, an Australian-born small animal vet, won in the You and Your Work category with her photograph ‘Happy Gastrotomy’, which captures a smiley squeeze-toy being removed from the stomach of a Labrador.

Of her winning photo, Mandy, who is currently taking time out from full-time work, said:

"I am so thrilled to be able to share this photo. It was actually about 10 years or so ago that I encountered this dog. We knew from radiographs that he had eaten a ball, but it was a lovely surprise to make the incision into the stomach and have this happy little chap beam out at us. We have such a cool job as vets, and this just nails it."

Mandy and Jen each received £250 worth of gift vouchers from John Lewis.

Alongside the 2 winning photographs, 5 photos in the You and Your Work category, and 8 in The Wonderful World of Animals category received Commended awards – ranging from blood samples to meerkats and veterinary podiatry – all showcasing the many unique facets of what veterinary work can entail.

You and your work

"We are delighted by the number and quality of the entries we received this year. The veterinary team is uniquely placed to capture the many wonderful facets of its work on camera, and we are pleased that our members have shared their eye-catching snapshots for BVA’s photography competition, offering us a vet’s-eye-view of their daily work and interaction with the wonderful world of animals."

The winning and commended images will premiere in an exhibition at BVA Members' Day at W5 Odyssey Belfast later this month (21 September).

The full gallery of BVA Veterinary Photographer of the Year Competition entries can be viewed on BVA's Flickr account.