Richard Walters was announced as the winner of this year’s John Bleby Cup. 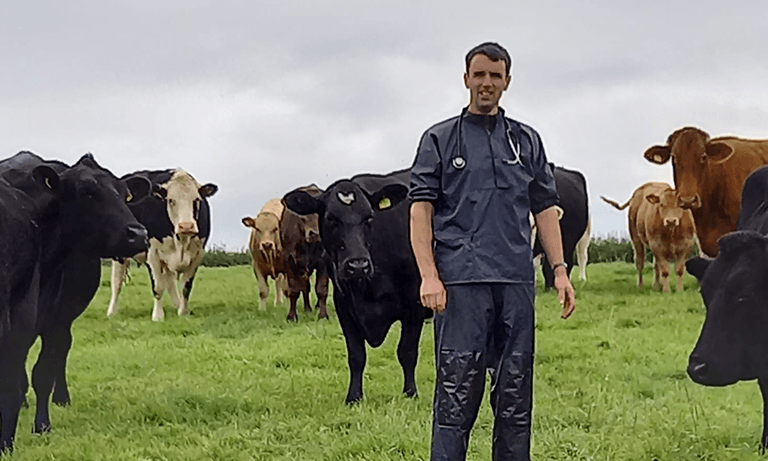 Devon-based vet Richard Walters was announced as the winner of this year’s John Bleby Cup during the British Veterinary Association’s (BVA) virtual Members’ Day today. He received the award in recognition of his exceptional contribution to the BVA Council, the Association’s key debating chamber where members’ views on matters of veterinary policy are represented.

Richard graduated from Bristol Veterinary School in 2010 and started his career in mixed practice in West Wales. Two years later, he returned to his roots in South Devon, to South Moor Vets, where he continues to enjoy being a general practitioner in mixed practice with a special focus on farm animal work, including TB testing, emergency care and herd health planning.

Richard was first elected to BVA Council as representative for South West England in early 2018 and was subsequently elected for a second term earlier this year. Apart from being a voice for vets in the region, he also brought his direct personal experience as a vet working in a region where bovine TB is endemic to the BVA TB Working Group. He was also invited to be part of a working group responding to the RCVS legislative reform, where the views of a GP vet working in independent practice were critical.

On hearing of his award, Richard said:

“It is a great honour to be awarded the Bleby Cup. I have enjoyed representing the views of my fellow vets in the South West, including those of Western Counties and Cornish Veterinary Associations. This award shows the value that BVA places in the views of everyday general practitioners like myself.”

“It gives me great pleasure to present Richard with this year’s Bleby Cup.

“Richard has made an outstanding contribution to BVA Council. Apart from many invaluable contributions to Council meetings, he has also been closely involved in the development of some key BVA policy positions, most notably our updated Bovine TB position.

“During the three years since Richard has been a Council representative, he has demonstrated his passion for ensuring that frontline veterinary experience is well represented, continually striving to engage members in the region and encouraging continual improvement to the way in which BVA supports and develops regional representatives.”

Apart from his association with BVA, Richard is also an active member of the British Cattle Veterinary Association, Sheep Veterinary Society and Western Counties Veterinary Association. When he is not in practice, Richard keeps busy running a small holding with cattle, sheep, pigs and chickens and enjoys spending time with his wife and their two young daughters.