Agriculture after Brexit… health and harmony?

With the publication of the new Agriculture Command Paper, BVA Policy Officer Michael McGilligan examines what it means for animal health, animal welfare and the veterinary profession. 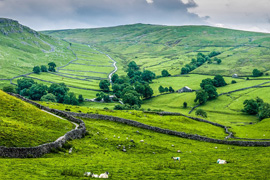 Brexit presents an exciting opportunity to reshape the system of agricultural support. Vets play a crucial role in UK agriculture, from the farm-gate to border checks- and everywhere in between. Now, we are at a crucial point where the Government needs to hear from the veterinary profession.

Already, we have put forward a veterinary vision for post-Brexit agriculture policy placing animal health and welfare as public goods at the centre.

Defra has now launched ‘Health and Harmony: The Future for Food, Farming and the Environment in a Green Brexit’, giving us some insight into how agriculture policy is likely to operate in England after Brexit. It is heartening to see the Government making commitments on animal health and welfare, reflecting successful campaigning by BVA.

The paper spells out an overhaul of the system of agricultural support, with a phased withdrawal of direct payments to farmers. This will be replaced with a system of public money being used for public goods that benefit producers, consumers and wider society. Amongst public goods cited in the paper environmental enhancement and protection are given most prominence - with animal health and welfare close behind.

As we know animal health and welfare underpin the reputation of UK agricultural produce, so we are extremely pleased to see these recognised as public goods that will be supported within future agricultural policy post-Brexit. Some specifics suggested in the paper for how this would look in practice include:

These suggestions are still at an early stage. There is an opportunity today for vets to engage and influence the final detailed policy. We will be responding to the consultation and I’m keen to hear from all members interested in the future of UK agriculture. You can send me your thoughts via [email protected] by 1 May 2018.

Agriculture after Brexit… where next for Northern Ireland?

Busy with Brexit: An update on BVA policy work

Brexit through the eyes of a Spanish vet: 6 months on

How to survive a no deal Brexit: a guide for vets

The impact of Brexit on vets in Wales

Brexit through the eyes of a Spanish vet