Disease surveillance - animal health and the border in Ireland

As BVA publishes its vision for disease surveillance across the UK, BVA Junior Vice President Simon Doherty explores why an all-island approach to animal health and disease on the island of Ireland is paramount as the UK leaves the EU. 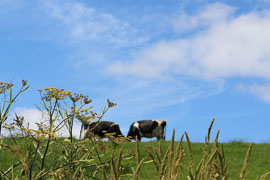 Northern Ireland is uniquely placed among the devolved regions of the UK as the only country to have a direct land border with another EU member state; the Republic of Ireland.

In many ways, we take the biosecurity afforded by being situated on a collection of islands off the coast of North-West Europe for granted. It’s only when particular epidemiological factors conspire to create a ‘perfect storm’ that the threat escalates to a point where veterinary surgeons and farmers sit up, take note and start to become concerned.

However, the biggest threats to our livestock populations in relation to the introduction of an epizootic disease, are likely to still be in imported food or feed, or imported live animals.

Hence the need for robust systems of import / export certification and scanning surveillance, to facilitate the early detection of changing patterns of disease, and emergence or re-emergence of pathogens.

We’re fortunate that technology allows us to keep a pretty good eye on what is going on in other parts of the globe. While bulletin system such as ProMED facilitate the rapid reporting of health alerts, websites such as the OIE WAHIS portal simplify the mapping by country of individual diseases; APHA’s disease surveillance dashboards draw on GB data to provide similar geographical visualisations. However, all of these systems rely heavily on the capability of a country’s laboratories to accurately detect and diagnose diseases, and for their animal health systems to be willing to report them.

A network of European and OIE reference laboratories exists to help regional and national laboratories to improve procedures and maintain globally-accepted standards in diagnostic tests; research collaborations between such government, academic and commercial institutes ensures that good communication networks exist to share new tests and to assist with knowledge transfer in the event of an outbreak of a disease. But it’s also crucial that information about new diseases is disseminated to farmers and vets in practice; literally the trained eyes and ears on the ground.

The island of Ireland

Despite all of the political history on the island of Ireland, the animal health sector has always been fairly well connected. Certainly in the recent past, Queen’s University Belfast and Ulster University have enjoyed fruitful collaborations with their academic counterparts in Trinity College Dublin, University College Dublin and Dublin City University,

At the applied research and technology transfer end, Teagasc – with several sites across the Republic of Ireland – carries out a lot of collaborative work with the Agri-Food & Biosciences Institute (AFBI) and the College of Agriculture, Food & Rural Enterprise (CAFRE) in the North. Particularly in relation to animal health, a lot of early-career research across the island is underpinned and supported by a very active branch of the Association of Veterinary Teaching & Research Work (AVTRW). The Northern Ireland Branch of BVA also enjoy a superb relationship with colleagues in the south, through regular meetings with Veterinary Ireland, when topics around surveillance and resourcing of local diagnostic labs are often high on the agenda.

Unfortunately, livestock diseases simply don’t respect political borders! Historically, it took significant political alignment to coordinate the activities of the government agriculture departments in Northern Ireland and in the Republic of Ireland, but they did record successes in the control and eradication of several economically important diseases, such as Aujeszky’s Disease (pseudorabies) in pigs and brucellosis in cattle.

Currently, in recognising that the island is a single epidemiological unit, the Department for Agriculture, Food & the Marine (DAFM), Teagasc, the Central Veterinary Research Lab (CVRL) at Backweston and a network of regional labs in the Republic of Ireland coordinate with AFBI and the Department of Agriculture, Environment and Rural Affairs (DAERA) to publish an annual All-Island Animal Health Disease Surveillance Report, which includes aquatic as well as terrestrial surveillance.

All of these programmes are underpinned by state of the art, accredited diagnostic laboratories feeding data from farms, abattoirs and pathology facilities into surveillance platforms.

Continuing an all-island approach after Brexit

But as we publish our position on veterinary scanning surveillance, there has never been a more important time to strengthen our relationships with our veterinary colleagues in the Republic of Ireland; profiling the crucial roles vets play in safe, economic food production – particularly around disease surveillance – and helping to maintain the viability of the agri-food sector in both jurisdictions.

What value do you place on disease surveillance?

Disease surveillance: are you aware of the services available in your area?