One Health Week: Does the vet have a role in tackling abuse in animals and humans?

As part of the upcoming One Health Day, we will be publishing a series of blogs to celebrate One Health. Here, past BVA President Freda Scott-Park explains how healthcare professionals can work together to prevent human and animal abuse. 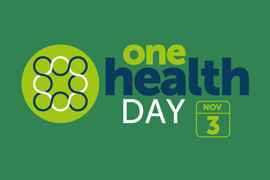 An aspect of One Health that is often overlooked is non-accidental injury, which can impact human and animal health. This is an important topic, and an area in which all healthcare professionals can play a vital role to improve the welfare of those under their care.

BVA supports The Links Group, which works to raise awareness of the ‘links’ to all professionals in the hope that agencies will work together to help prevent related cases from going undetected. Chair of the Group, Freda Scott-Park, tells us more:

The concept of One Health recognises the interconnections between animal welfare and human wellbeing. The Links Group promotes this aspiration, firmly believing that vets and the wider veterinary team have a role to play in helping to prevent animal abuse, domestic abuse, and child cruelty. The Links Group came into existence following a conference in November 2001 called ‘Forging the Link’ and the natural question from the veterinary surgeons, including me, was: "link to what"?

However, the speakers at the conference clearly demonstrated the link between animal abuse, cruelty to children and domestic violence. There was confirmation that non-accidental injury in our pets or farm animals may be an indication that there is going to be, or already is, violence against a person (or persons) in the same household.

The police are aware of the links between domestic abuse and pet abuse, acknowledging the heightened risk for victims when their pets have been abused. Two women (in England and Wales) are killed every week by a partner or an ex-partner and with over 50% of households owning a pet, they recognise that for many victims of domestic abuse, pets are a source of comfort providing strong emotional support for them and their children. However, perpetrators often exploit this bond.

Victims of violence will often delay leaving their homes because they cannot take their pets with them; this can have devastating results on the health and wellbeing of both the victim and their animals and in some cases, this delay has resulted in the death of a victim. The abuse of multiple pets may provide the police with an opportunity to link cases of domestic violence where perhaps evidence was lacking for court purposes as a single event, which explains their willingness to work with vets who identify abuse in animals.

Barriers to progress: confidentiality and communication

There have been barriers to progress within the veterinary profession; not least the understandable apprehension that by reporting incidences of non-accidental injury to the authorities there is a risk of driving animals away from treatment, just when they need it most. The fundamental question for the vet remains: “Did I do everything I could to ensure that animal’s welfare?”

There is still overwhelming concern about breaching client confidentiality. The Royal College of Veterinary Surgeons is to be commended for the current guidance on dealing with animal and human abuse.

Through our Links Veterinary Training Initiative, I now encourage vets to explore ‘confidentiality’ (protecting the identity of the client) in tandem with ‘communication’ (with professional colleagues, who may be veterinary colleagues, animal welfare agencies, human healthcare professionals or the police to prevent further injury to animals or vulnerable humans). The latter is a professional decision, taken after due consideration of the facts to hand and to ameliorate further risks of harm to either animals or vulnerable humans.

The human-animal bond is vital to health

The factors behind the importance of the role of the vet are rooted in the human-animal bond; there is some evidence now that even political parties recognise the beneficial value of pet ownership and the BVA welcomed the Royal College of Nursing’s protocol ‘Working with dogs in healthcare settings’.

However, in an abusive relationship, the pet may be used to control or coerce the victim, and even if they (the pet) are not being directly hurt, they are often severely traumatised by the level of violence or tension in the house. Often the pet is the only source of comfort for a victim of abuse and therefore the pet’s status becomes even more precarious, since perpetrators exploit this reliance on a source of support for their victim.

Our medical colleagues need to recognise that animals play a vital role in keeping people healthy but when that bond is threatened or abused, then health and welfare of both human and animal rapidly deteriorates. Collaboration is key to preventing violence; if a veterinary surgeon can help even one victim of violence in their lifetime, they have reason to be proud – they will have contributed to the tenets of One Health.

One Health Week: Death as a One Health issue, could doctors learn from vets?

One Health Week: Augmented reality, One Health for the real world

One Health Week: One Earth, the impacts of climate change