Farm vet and BVA South West regional representative Richard Walters shares his 10 years' of experience working with cattle and what the future of bovine TB control could look like. 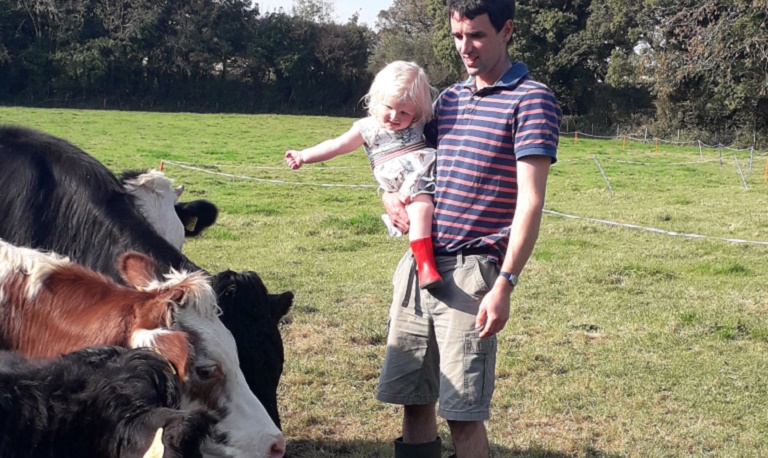 Clip-clip, measure-measure, jab-jab. As a 15-year-old on work experience I remember travelling around in the vet’s Land Rover watching the seemingly endless TB testing. Thinking back on it, it is surprising that a 15-year-old would think ‘this job is for me – bring on 8 successive years of exams to pass so that I can get stuck in!’ But at the time I remember thinking surely somebody will come up with a solution – there is no way I will be doing all of this clipping and jabbing if and when I graduate, I’ll just get stuck in to the fun stuff like calvings and caesareans! The farmers and vets all ‘knew’ it was the badgers’ fault so the solution was obvious…. And if not, there would be a vaccine in 10 years time!

Sure enough my first job on graduating in 2010 was in west Wales on the outskirts of the ‘Intensive Action Area’. Clip-clip, measure-measure, jab-jab. Some tests were clear, some were not. Often a farming business’s success or failure seemed to hang on the TB test balance. Some farmers seemed luckier than others!

Moving back to my homelands of South Devon in 2012, it was obvious that I was in for more of the same; clip-clip, measure-measure, jab-jab. I find I don’t mind the job of TB testing. Working with cattle and people I have come to know, often outside is actually the job the 15-year-old me was after. Sometimes it can be a bit monotonous, as can parts of any job, but it is rewarding to be part of the farm team trying to get the job done as efficiently as possible.

So now I have been graduated 10 years and likely surpassed my 100,000th clip-clip, measure-measure, jab-jab (with plenty of palpating in between) what is the future? It has been fascinating to work alongside many people who are experts in their fields on the BVA bTB policy position. For a single disease the topic is enormous with almost endless research and reviews. Whilst there are lots of very intelligent people who know a lot about this disease, what actually happens on the ground and in terms of government policy is decided by very few and over a short timeframe.

In our practice area most of our farms are now into the supplementary phase of badger culling. Since 2016 when culling started and 2018 when widespread gamma testing started there has been a definite reduction in both new cases and herds under restriction, but TB hasn’t gone away. Like any disease, it is essential that once some momentum is built up, the intervention is followed through until the disease is under real control, otherwise it will bounce back again. With a disease as slow moving as TB these timeframes are necessarily long.

What is clear is that as cattle vets we must involve ourselves more fully with this disease. British cattle farms are hugely varied and won’t all get better disease control by being shoe-horned through stricter and tougher testing and penalties. It is also an evolving industry. It is predicted that beef from dairy will grow over the next decade which will alter cattle movement – can we make this safe?  We need far greater flexibility to use different tests and management strategies on different farms which can be agreed on between the farmer, the farm vet and the government vet to reduce the risk of both within-herd and between-herd spread. The goal for each farm needs to be genuine TB freedom, not just two clear skin tests at 60-day intervals so they can unload surplus stock and pay some bills. Farmers will need help and support to achieve TB freedom. Us farm vets must ensure we play our part!